I love peasant food–and I should explain what I mean by that term. In traditional societies and cultures, peasants are the people who form the foundation of society. They are the people who produce the food that everyone eats: the farmers who grow the fruits and vegetables, who raise the livestock that provide milk, cheese, and meat, and the fishermen who catch the fish and other bounty from the sea. Because they generally are not wealthy folk, their cooking emphasizes inexpensive but hearty meals such as soups and stews that use whatever ingredients are readily available, and because peasants cannot afford waste, often use items that the wealthy might throw away–such as a fish carcass. 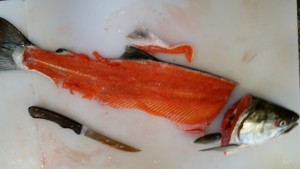 This soup recipe uses the carcass of a salmon. Jeanette and I usually buy a whole salmon several times a year from our favorite seafood market: the Fisherman’s Market in Eugene, Oregon. By buying a whole fish, the price per pound is much lower than buying just a fillet, plus we want the carcass. If you don’t want to purchase a whole fish but do have access to a good seafood market that gets wild salmon, you can probably get them to give you a salmon carcass for free or close to it. Last week, however, a friend took us salmon fishing on the Siuslaw River and we caught three beautiful fish, which–after cutting them up, vacuum-sealing the fillets in meal-sized portions and freezing them–left us with three carcasses, so we knew a big batch of soup was on our agenda.

The night before you plan to make the soup, soak about a half pound of cannellini beans in water. Although you can use canned beans, you’ll end up with a much heartier, richer tasting soup if you use dried beans and cook them in the soup broth. Just be sure to soak them overnight so they won’t take too long to cook. 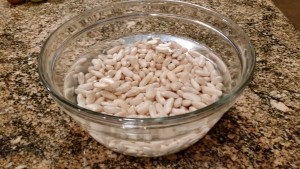 The next day, after you assemble your other ingredients–more on them in a moment–the first step is to simmer the carcass. Using a large stockpot, add the carcass, including the head and any fins trimmed off while filleting the fish, plus a wedge or two of onion, a few chunks of carrot, and four or five bay leaves. Fill the pot about two-thirds full with water, bring it to a low boil, then reduce the heat to a simmer and cook the carcass for an hour or two, until the meat left on it is cooked and the bones are on the verge of separating. Using a slotted spoon and/or tongs, remove the head and pieces of carcass from the pot to a large bowl, and once they cool, pick the meat off of them. You should end up with a nice bowl of small pieces of salmon meat. 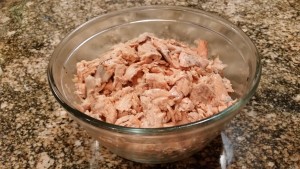 Set it aside in the refrigerator for now, and discard the head and bones. Pour the broth in the stockpot through a colander or wire mesh strainer to remove any debris and solids (you can either discard the onion and carrot used to make the broth or add them back into the soup, but be sure to add the bay leaves back in), then return it to the stockpot.

Drain the beans, add them to the broth in the stockpot, and return the liquid to a low boil. Now it’s time to add the vegetables.  These can vary depending on what you have available–that’s the peasant style of cooking–but basic ones to use include a coarsely chopped onion, several cloves of garlic coarsely chopped, and a few carrots, sliced into chunks about a half inch thick. I usually add a leek and some cabbage, but on this occasion we had some collards in our garden that needed using, so we substituted them for the cabbage. 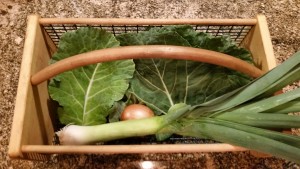 Whether you use cabbage or collards, you’ll want about four or five large leaves. Slice them into strips roughly an inch wide, then cut the strips into pieces about an inch square, and add them to the pot. Cut the root off of the leek, and slice the stalk into pieces about half an inch thick. Above the stalk, discard the outer leaves that are tough or dried out, but save some of the center leaves that are tender–they’ll probably have a bit of dirt in them, so be sure and rinse them as you separate them. Slice the saved leaves into strips about a half inch wide, cut the strips into half inch square pieces, and add the leek to the pot.  Season the stock with two to three teaspoons of sea salt and pepper to taste. A type of pepper I like to use in soups and stews is long pepper, sometimes sold as Balinese Long Pepper. They impart flavor, but not heat–just throw four or five into a dish this size while cooking. 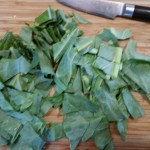 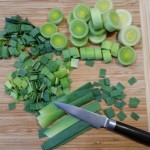 The beans and collards–or cabbage–will probably need to simmer at least two hours, possibly longer, to become tender. After an hour, periodically pull a few beans out with a slotted spoon and test them. Also after the first hour, add a large handful of sliced shiitake mushrooms–an optional ingredient, but they impart a nice flavor–to the pot. 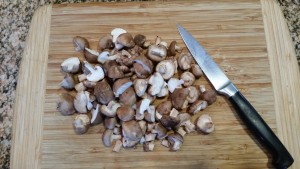 Once the beans and collards/cabbage are tender, taste the broth for salt and add more if needed. Stir the reserved salmon meat into the soup, let it warm for about fifteen minutes, and you’re done. We like to serve it with a salad and a big chunk of baguette, to sop up the broth. Don’t worry if you have a lot left over (and you probably will, unless you’re serving a crowd). This soup freezes very well, and makes a wonderful prepared meal to pull out of the freezer at a later time. 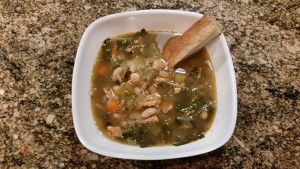