Now, on the Haricot Verts, which is French for “green beans.”

I grew up in the south. The green beans I ate as a child were called string beans, or sometimes snap beans, because to prepare them you would break or “snap” them into roughly one inch long pieces, peel off the tough string along the side that was exposed when you did that, them simmer them in salted water for a long time, usually with a ham hock for added flavor, because they were tough and it took a long time to cook them into tenderness. They were delicious, and I still occasionally cook them that way to this day–our nickname for them now is “hammy beans.” But in 2005 Jeanette and I experienced a totally different kind of green bean and way to prepare them.

That year we saved up our pennies and traveled to Paris to do research on what would become books 2 and 3 of the Strongbow Saga. The background setting for those books was an actual Danish military campaign in the year 845 A.D., during which a fleet of 120 Viking ships raided up the Seine River and ultimately captured the city of Paris in a surprise attack on Easter morning. The historical campaign was an amazing story, and made a wonderful backdrop for a portion of Halfdan’s story in The Strongbow Saga. But I had run into a problem: I could not find any information at all about what the city of Paris looked like in the year 845, and I was trying to tell the story with as much historical accuracy and detail as possible. Thus the trip to Paris came about.

But this post is not about the research and what I learned–it’s about beans. When we travel (which is not often), Jeanette and I don’t like fancy hotels and restaurants. We like to stay in B&Bs or small inns, and eat in the small restaurants and cafes where the local people eat. One night in Paris, we ate in a tiny little cafe, run by a father and his adult daughter, and had a very simple meal–a roasted chicken leg and sauteed green beans were the primary components. But though the meal was simple, it was delicious–so much so that we ate there again and had the same meal another night. The chicken had more flavor than I’d ever tasted before in chicken (and I later came to realize that was because of the way most chickens raised for meat by commercial poultry factories in the United States are produced), and the beans were an entirely different vegetable from what I’d grown up eating: they were crisp and delicate, very light and flavorful and crunchy. As we later discovered, they are also very fast and easy to prepare. Here’s how.

You don’t want to buy the standard green beans that are widely available in most U.S. grocery stores. What you’re looking for are beans that were picked when they were still young and delicate, much narrower in size than the standard beans. Fortunately, they’re becoming much more readily available in grocery stores, and are a popular item in many farmers markets, too.

We grow our own now, and for the gardeners out there, the variety we like best are a heritage breed called Spanish Musica. They’re slightly different from traditional French haricot verts varieties, which tend to produce round, slender beans about the diameter of a slim pencil–Spanish Musica beans are flattened in shape. But we prefer them because when picked at a very young and slender size, they’re perfect for haricot verts, but if you let them get larger they still cook up tender and delicious when used in soups and stews. And you can grow a lot of these beans on a very small footprint in your garden which, when we used to live in Texas and only had a tiny garden, was an important consideration. Spanish Musica are pole beans, which means they’re essentially a vine that needs some kind of support to climb on, and these are very vigorous climbers. We use bean towers sold by Gardener’s Supply, and can grow a summer’s worth of beans, and have plenty to put up for the winter, using a single tower, which only takes up about 18 square inches of ground space.  And when production starts to fall off, don’t give up on the vines. Water the foliage with a soluble fertilizer such as fish emulsion, and they’ll produce a whole new round of blossoms and beans.

But I am digressing. This is about how to cook haricots verts, not how to grow them. As I mentioned earlier, you want to use beans that are young, small, and tender. In this photo, the beans on the bottom of the cutting board are the size you want–the ones on the top have gotten large enough to be more suitable for use in soups or stews. 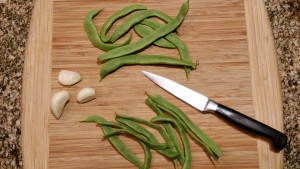 Trim off any pieces of stem, and cut the beans into roughly two inch pieces–for most beans, this will be just cutting them in half. Coarsely chop three to five cloves of garlic. Coat the bottom of a skillet with a good quality olive oil–it’s a major component of this simple dish, so pick a flavorful one–then add the beans and garlic. 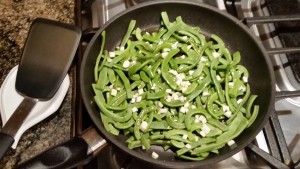 Turn the heat on to medium high, and saute the beans, stirring constantly. This won’t take long, because the beans are tender to begin with, and you want the final product to still be crisp and crunchy. When the garlic has turned a light golden brown and the beans have turned a bright green and are just beginning to show a little browning or blistering in spots, remove them from the heat, salt lightly, and serve.