I’ve written before on my author page on Facebook about the flock of crows Jeanette and I have formed a relationship with here on our farm. They are astonishing creatures: very communal and social, and extremely intelligent–according to some sources, the most intelligent of all birds. From some of the things we’ve seen, I can well believe it.

It is well documented that crows will sometimes form relationships with humans, particularly if the humans feed them regularly, and on occasion they will even even give gifts, such as some sort of shiny object, in return. Our own relationship with our local flock of crows involves a mutual exchange, but of a different sort: we feed them twice a day, and in return they provide us a valuable service.

It all started one summer about two years ago, when a pair of red-tail hawks set up housekeeping on the forested mountainside just across the river from our farm. We keep a small flock of chickens, and during the day they free range in two small fenced pastures just off the barn, where their coop is located. In the past we had occasionally lost a hen to hawks, but that summer the red-tails caught and killed three of our birds, a rate of loss our small flock could not for long sustain.

Around the end of that summer our Border Collie, Sigrid, had an unfortunate encounter with a nest of yellowjackets, which led to her developing some skin allergies. As part of our efforts to keep those under control, we switched her to a new dry dog food. We had over half of a bag of the old feed left, so we tried putting it out for our chickens. They didn’t particularly care for it, but the large flock of crows that live near our farm loved it–we noticed that whenever we put some of the dog food out, they would fly in and eat it as soon as we left the area.

Hawks and crows are natural enemies, and we had, on occasion, seen crows attack a hawk and drive it away. Crows are incredibly agile, acrobatic flyers, and they fight a hawk by climbing up above it then diving down and swooping past the trailing edges of its wings. Although I’ve never seen a hawk actually get injured by this kind of attack, after it happens repeatedly it unnerves them, and they fly away to escape the harassment. So we decided to start feeding the crows regularly, to see if maybe they’d hang around more frequently. 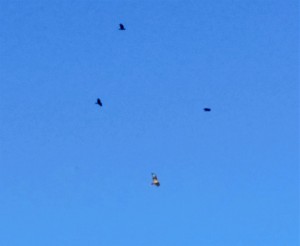 Crows attacking a hawk over our farm.

The arrangement has proved more successful than we could have dreamed. We now put food–a small scoop of five grain chicken scratch, and a large one of dog food (Safeway brand small bites formula is their favorite) out for the crows on the driveway in front of our barn twice per day–once in the morning, when we first go up to open the barn and let the chickens out, and again in late afternoon. Some mornings, like today, the crows will be already there, waiting for us, and will greet us with a chorus of loud caws as soon as we step out of the house. Other times they’ll be waiting in the tall trees along the edges of our farm, and as we near the barn they’ll do a flyover just to make sure we don’t forget about them. After we let the chickens out, Jeanette puts the crows’ food out on the driveway, and as soon as she steps back into the barn they come swooping in. 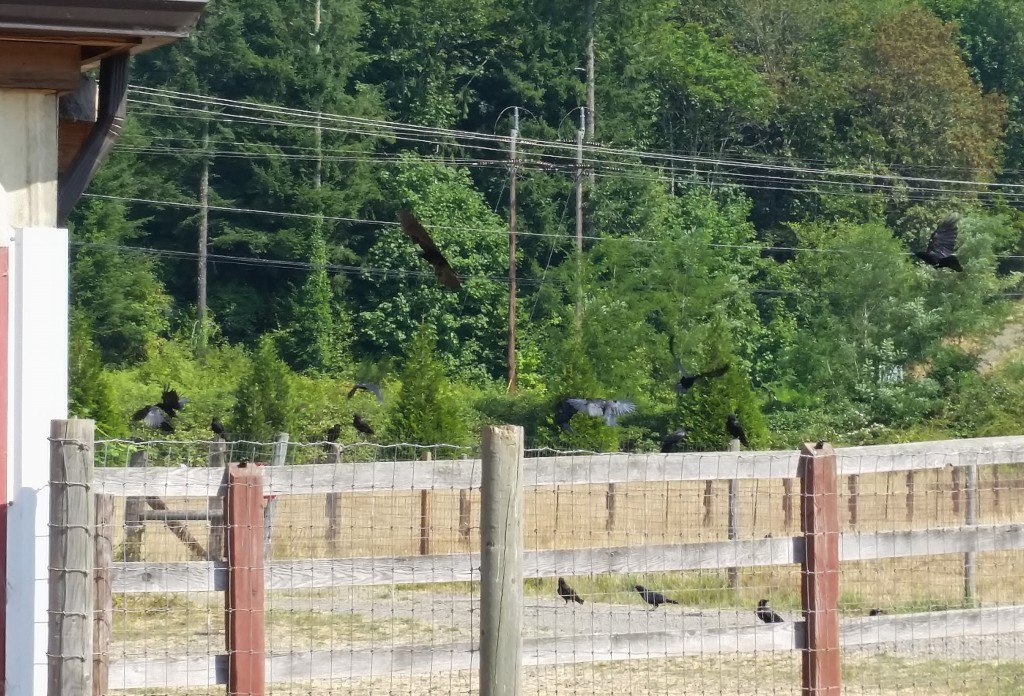 The crows coming in for their breakfast.

What the crows give us in exchange is extraordinary. They don’t just hang around more frequently, as we’d hoped. They actively stand guard over our chickens. When our birds go for a walkabout, almost invariably some of the crows will take up posts on the barn roof and/or fence posts along the chickens’ pastures, keeping a lookout for hawks. 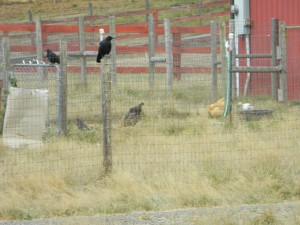 Crow sentries on duty while the chickens free range.

And the chickens have become quite used to the crows. After we leave the area, they mingle freely, and the crows will share in any uneaten scratch or treats we’ve put out for our birds. Crows are not quiet birds by nature–they caw back and forth to each other frequently. What is fascinating is that although to us their calls all sound quite similar, the chickens have learned to distinguish them. Generally they ignore the crows’ chatter, but there is a certain call the crows make which the chickens have learned to recognize as an alert, and when they hear that, they run full speed for the safety of the barn. 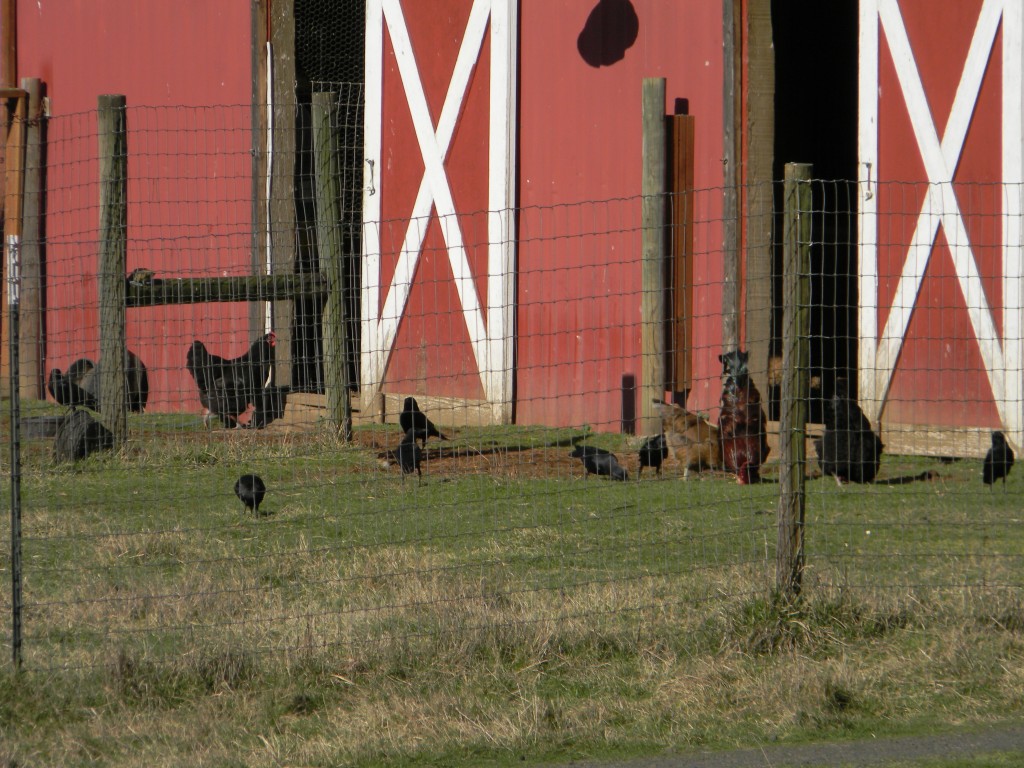 The chickens and crows socializing.

We have not lost a single chicken to hawks in the past two years, since we began feeding the crows. The red-tails are still around. Just last week, as we were walking up to the barn in the morning, we saw the big male circling overhead. But a few minutes later, after we’d opened the barn and I was washing out a chicken waterer in front of it, I heard a chorus of caws and saw the crows swirling up into the air from where they’d been eating on the driveway in front of the barn. When I looked up to see where they were going, I saw the hawk flying as fast as he could away from our farm with several crows in pursuit.

The crows’ behaviors that we’ve observed raise some very interesting questions about their social structure, intelligence, and communication. Around our farm, we never see a solitary crow. They are very communal–there are always at least several together, and often they congregate in large groups, as many as fifty together at a time (especially at feeding time). On a few rare occasions, always close to dusk, we’ve seen a huge swarm of crows, hundreds and hundreds of birds, flying high overhead, and our flock will fly up from the surrounding trees and join them, swooping and swirling in complex patterns.

And the crows do the same thing for themselves that they do for our chickens: while most of their flock are in the driveway, eating the food we’ve put out, or are wandering through a pasture, foraging, there are always several birds stationed on fence posts, in trees, or other vantage points, standing guard to protect the flock. How do they decide who eats and who stands guard? That suggests very complex, sophisticated social structure and interaction. This is a large community sharing resources and duties and caring for each others well-being, a far more complex thing than the natural protective instinct most animals show for their own young. And how do they communicate who will do what? Typically there are a number of sentries keeping watch, and they all are looking in different directions. But if someone fails to do their job, the results could be deadly. One day by chance I happened to be looking out a window and saw what happened when someone obviously dropped the ball. 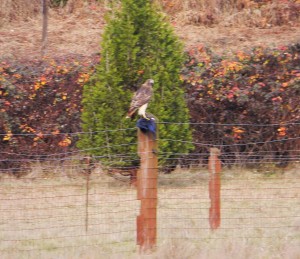 Death dropped out of the sky for this crow.

On this occasion, the red-tail got his revenge on his tormentors. He came down like a blur and hit this crow sentry–by its size, a young bird–hard, killing it instantly. When I stepped outside to take this picture, I could hear the other crows cawing in distress, but they kept their distance. The hawk sat on the fence post for a long time, turing his head back and forth, and if taunting his enemies, then finally flew off, carrying the dead crow in his talons.

One thought on “Our Friends the Crows”