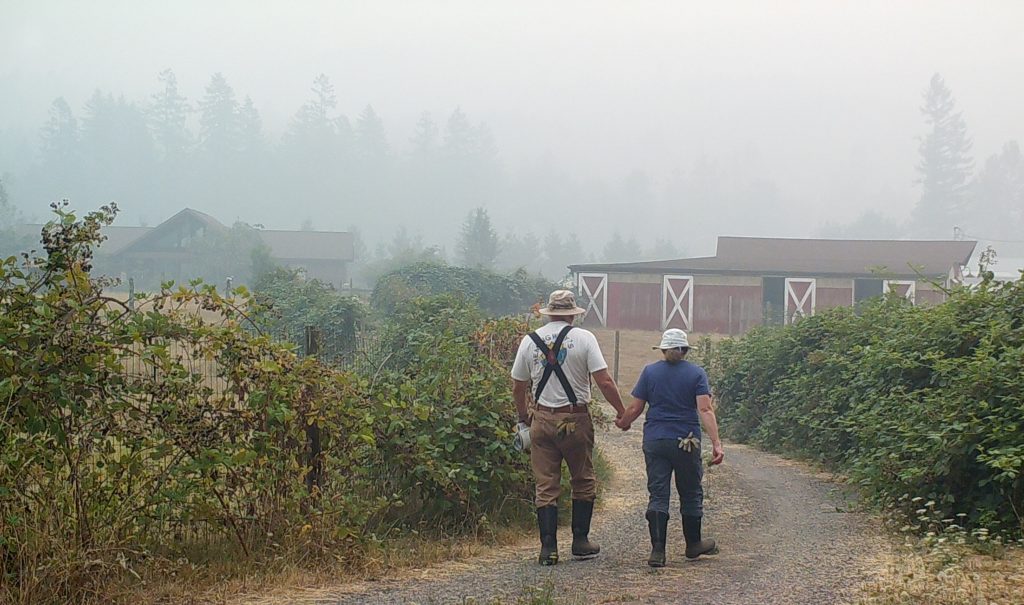 Let’s make the obvious official, and get the bad news out of the way right up front: Book 5 of the Strongbow Saga will not be released in 2017. As I’ll explain in greater detail below, I have lost too much time in recent months to have been able to even complete writing the book, much less complete the steps necessary to publish it, including editing, formatting for print and e-book editions, and getting a cover designed. I am very, very sorry, but it just did not work out to be possible this year. My new goal is to complete and publish it sometime in the first half of 2018.

So what happened?  In a nutshell, this summer was a tough one for us.  About five and a half years ago my wife, Jeanette, and I moved from Houston, Texas to a small farm in the McKenzie River Valley in western Oregon to change from city life to a homesteading lifestyle.  As part of our new life, we strive to produce a majority of the food we consume. We grow a large variety of fruits and vegetables, raise chickens for eggs and occasionally meat, and have a herd of sheep, which also provides meat. It’s a lifestyle that puts us closely in touch with nature and with the natural cycles and rhythms of life. It’s also a lot of work and sometimes quite exhausting, but we enjoy it.  To the extent it’s a burden, it’s one we choose.

This year, Mother Nature made the burden much harder. Spring was unusually cold, wet, and late.  Whereas we normally begin planting our extensive garden as early as April, and typically have it fully in by early June, this year, due to the weather, we were forced to delay most of the planting until June, which meant that every day during the early summer was consumed with frantic work in the garden trying to get things planted in time for them to reach maturity and harvest. Then, by July when the garden finally began producing steadily, once again our time frame was compressed, and our days were spent harvesting and processing crops for storage, either by freezing, canning, or (on a small scale) fermentation. The winter’s supply of hay also had to be cut—something we normally do in June and July, but this year couldn’t get too until late August and early September.

Simply put, June through October were exhausting. And adding to the feeling of relentless grind was the often brutally hot and very dry weather of July and August, forcing us often to do our outside work late into the evening after temperatures began to fall. Also, during much of August and part of September, thick smoke (as the photo above illustrates) often blanketed our farm from the numerous wildfires burning across Oregon, some only ten to fifteen miles away. Most days we only ended up grabbing an hour or so of respite, usually after 11:00 PM, by collapsing on the sofa with our dinner and our good friends a bottle of wine and Netflix.

By mid-fall, when the garden chores finally began to slow—and thankfully, the rains began and extinguished the wildfires—we had to catch upon everything other than the garden that we had been neglecting on the farm. Needless to say, no work of any kind occurred on the book during that stretch of months from June through early November. Only recently have we begun to feel “caught up,” and only recently could I even contemplate getting back to work on Halfdan’s story—although encouragingly, I have made some good progress in the past month.

But though this summer was a struggle for us, we cannot help but feel, in light of what has been happening around the world this year, to feel fortunate. Our freezers are full with the bounty from our farm, and we have our health—although Jeanette was injured earlier this month, painfully but fortunately not permanently, when a young ram butted her in the leg.  2017 was so much worse for so many others. It has been a year of terrible natural disasters: hurricanes hitting Texas and Florida, devastating Puerto Rico—where over half of the population are still, months later, without electrical power—and other islands in the Caribbean, and even striking, of all places, Ireland; huge, deadly wildfires raging around the globe, including in Portugal and California (where some fires are still burning even still), several horrific mass shootings in this country, and brutal acts of terrorism in others. We dealt with exhaustion and lost time, but compared to so many who have experienced devastating loss, we are among the lucky ones.

It feels like the earth spoke this year. Although there are still those, including the current president of the United States and many cabinet leaders in his administration, who try to deny it, we are all facing a very dangerous global threat. The earth’s climate is broken, and we—human beings— broke it.

The deniers argue that there have always been climate shifts, with prolonged cold periods, like the ice ages, and prolonged hot ones. That is a simplistic argument that ignores what is different about what is happening now. Past major climate shifts occurred gradually over extended periods of time, hundreds or sometimes even thousands of years. This one is happening at a speed that has never been seen before. Every year the average temperature of the planet is rising. Almost every year new records are set for high temperatures, droughts, and other measures of climate.  And the rapidly rising temperatures are setting in motion more and more extreme weather patterns and catastrophic weather-caused events.

This is not theory or conjecture. It is accepted by the overwhelming majority of scientists around the world. It is accepted by the government of every single country in the world—except the United States, thanks to our science-denier president. Think about that. Every other country in the world has now joined the Paris Climate Accord, an international agreement that human-caused climate change is happening, that it is terribly dangerous, and that every nation must do what it can to curb the emission of greenhouse gases in order to try to slow the warming of the planet. The only country in the world now not a part of the Paris Climate Accord is the United States, because an ignorant man thinks that the world coming together to fight a great danger was a “bad deal” for the United States.

We are all citizens of the earth. We are all in this together. Things are going to get worse. I would like to be able to add “before they get better,” but there is really no assurance that they are going to get better, at least not in our lifetimes, if at all. The planet, and the human species, are in uncharted territory.

Let me give one small example. My son is a scientist in training. He is a PhD candidate in an area of very advanced applied mathematics: creating mathematical models to predict real-world biological trends and events. He visited for the Christmas holidays, and spoke about one such predictive problem he’d been studying: the bleaching and dying of coral reefs around the world, due to rising ocean temperatures. He explained that the difficulty creating a predictive model about the reefs illustrates how what is happening with the climate is a new phenomenon. Normally historical data on things such as prior occasions of coral reef bleaching, changing ocean temperatures, etc., over time would be used to create a mathematical model. But there is no prior data. There is no evidence that a mass die-off of coral reefs has ever occurred before. But it is happening now, and the rate at which it is occurring is accelerating. There is a genuine possibility that the tiny sea creatures that create coral reefs may be facing extinction.

That might not sound very serious to you. But life on this earth is intricately interconnected. Coral reefs create rich, healthy habitat for a large variety of fish and other sea creatures. If the reefs all die, it will have a negative impact on every creature that depends upon them to live. Numerous major close-to-shore fisheries around the world will collapse. When that happens, millions of people will lose not only their means of supporting themselves and their families, but also their primary source of food.

That is the elephant in the room that so far has not been widely addressed in discussions of climate change. As species extinctions occur, as areas that now are capable of producing food no longer will be able to due to drought, as heavily populated coastal areas become uninhabitable due to rising sea levels caused by melting arctic ice, there is going to be a humanitarian crisis on a scale the world has never seen.

Think about it. Try to get your head around it. Over the past few years, the European Union has been strained at times almost to the breaking point by an influx of hundreds of thousands of refugees fleeing the wars in the Middle East and Africa. That is just a fraction of what is likely to occur as the climate changes brought on by increasing global temperatures progresses. What is going to happen when there are millions upon millions facing and trying to flee starvation and uninhabitable homes?

We are all in this thing together. We had better start acting like it.