Here’s an unusual heart-themed idea for a special Valentine’s Day meal, which also provides a look at a historical Viking-era recipe: stuffed roasted sheep’s heart. The Vikings would not have celebrated Valentine’s Day, of course—it was originally an early Christian feast day, in honor of a saint martyred in ancient Rome, and did not become associated with romantic love until the Middle Ages. However, because of the relatively small size of this specialty meat, roasted stuffed heart would have undoubtedly been a “special occasion” delicacy, such as would have been prepared for an honored guest, or perhaps even (and this is purely my own conjecture) for a couple at their wedding feast.

This recipe comes from An Early Meal—A Viking Age Cookbook & Culinary Odyssey, by Daniel Serra and Hanna Tunberg, a wonderful, very thoroughly researched book that combines historically authentic and surprisingly delicious Viking-era recipes with fascinating bits of history and archeology behind their discovery and creation.

You will need the following ingredients:

–One sheep’s heart. Although I have not tried it, I suspect a deer heart would also work well. 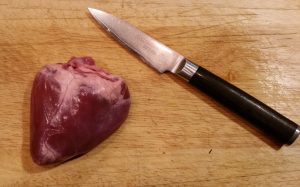 To begin, using a sharp knife split the heart lengthwise by cutting along one side, and open it out flat. Trim out all tough inner chamber walls and valves, so that only the main body of the heart muscle remains. 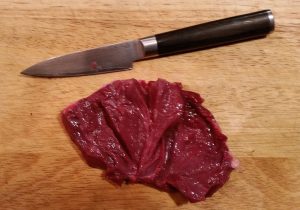 To make the stuffing, chop some of both the white end and tender green leaves of the leek. Crush the juniper berries with a mortar and pestle. Dice one slice of bacon into roughly one-quarter to one-half size pieces. Place the chopped leek, crushed juniper berries, chopped bacon, and blueberries or lingonberries together in a bowl, and stir them together with enough honey to bind them together. 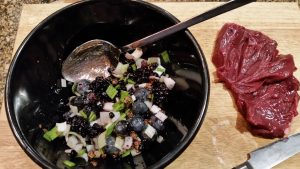 Place the stuffing in the center of the opened heart and fold the heart closed around it.  Wrap the heart with two to three slices of bacon to cover it, then wrap and tie with cotton cooking twine. 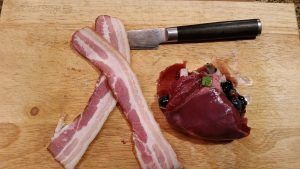 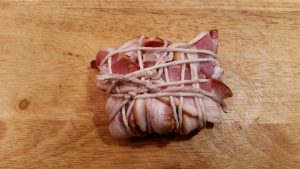 The original cooking method, according to the recipe, would have been to put the heart on a spit beside an open fire and roast it slowly till done. I cooked it on a charcoal and wood smoker grill, in which a fire is built in the firebox using a charcoal base with pieces of wood added, and the heart was placed in the attached smoker compartment, so that it was slowly cooked by offset heat and smoke. Turn the heart periodically to cook evenly on all sides. When done, the bacon will be crisped and brown, and the heart, though cooked through, will still give off red juices when pierced. 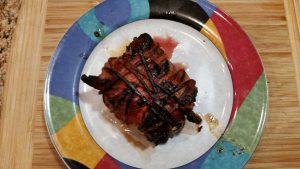 Slice thinly to serve, and enjoy a delicious glimpse of what the Viking peoples cooked and ate. 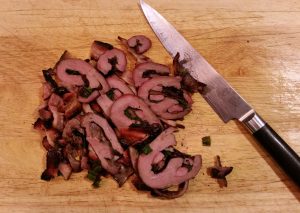