It has been far too long since I have posted an update here—not since my rather grim post in late January about our hard year in 2020. I apologize for leaving you all in the dark, about Jeanette and me, and about book 5. I also apologize to all who’ve tried to send me messages through various formats, which I have not responded to. I have not had time to spend on social media in recent weeks.

I am happy to report that this year has been far, far better than the last. Jeanette’s and my health, overall, have been good. The mystery condition in my legs was finally diagnosed as a fairly rare, and thus not readily recognizable, symptom caused by my Multiple Sclerosis. It was affecting the autonomic nervous system in my legs that assist with the circulation of blood, causing the blood flow to slow, and blood to pool in the veins until it leaked out into the tissues and caused the swelling and nasty looking rash and sores. It is mostly under control now—I still have occasional pain in my legs, and so far they do not let me hike as far as I used to do regularly. But then again, I will turn 70 in a few weeks, and my legs are not the only parts that are showing wear and tear from the years. I miss a young man’s back! The fix for the leg condition (and very appropriately, the wonderful physician, a dermatologist, who finally diagnosed the condition is named Dr. Fix) was surprisingly simple: I have to wear compression stockings on my legs to assist the blood circulation. May all of my problems find such simple solutions!

This year, like every year, brought its own unique mix of joys and challenges. We have been fortunate, living in relative isolation on our farm, to have been able to avoid most of the effects of the Covid-19 pandemic, which continues to rage around the world. In fact, just yesterday we learned of a new and potentially more dangerous variant of the virus that has developed in Africa. Jeanette and I have paid the virus the cautious respect it deserves: we got vaccinated as soon as we could, more recently have gotten booster vaccinations, and we religiously wear masks, regularly douse our hands with sanitizer, and try to maintain safe distancing whenever we must leave the farm and go out in public. It continues to baffle me that so many still refuse to get vaccinated, when by now millions upon millions of people have been vaccinated, with no ill effects, whereas the Covid-19 virus continues to kill relentlessly—as I write this, we are nearing 780,000 deaths from it in the U.S. alone, and millions more have died around the world. Those who spread lies and misinformation about the vaccines have a lot, including thousands of unnecessary deaths, to answer for.

Here on the farm, nature, and the change of seasons, play a large role in our existence. In late winter this year, as we always do, we began the early stages of working on our garden, which we depend on to provide a large percentage of the vegetables we eat throughout the year. 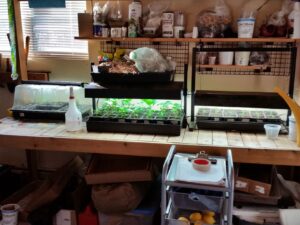 Seed starts for the garden.

Spring brings lambing season, always a fun time, although occasionally also sad times, when a lamb does not survive. We do not take extraordinary measures to try to save unhealthy lambs. Our ancient-breed heritage Soay sheep are by nature very hardy and self-sufficient. We do not want to weaken the herd by introducing members with weaknesses or ailments that might be reproduced over time. 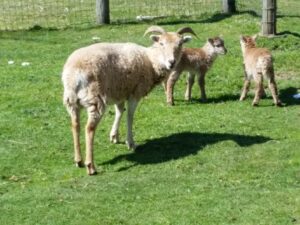 Deedee, one of our Soay ewes, with her twins. 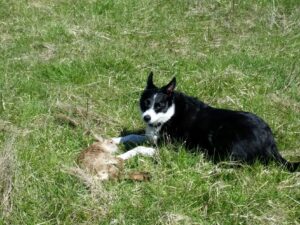 Sigrid and a dead lamb.

Although there were a few underperforming areas—every year there always are—overall, our garden and orchard had a very successful, productive year. Some crops, in fact were our best to date, including eggplant, peaches, pears, and apples. 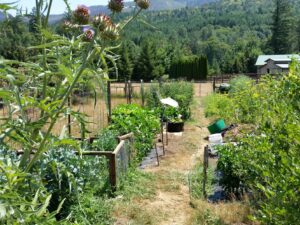 The garden in midsummer. 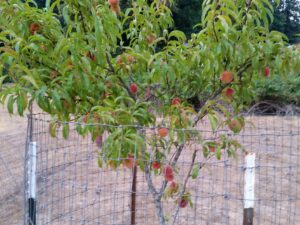 One of our peach trees, loaded with fruit. 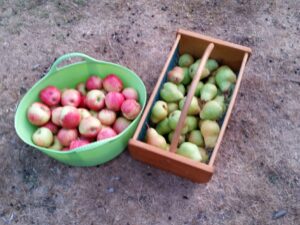 One day’s harvest of apples and pears.

At times the bounty felt like a mixed blessing. Heavy production means long hours of preserving the various crops, so we can enjoy them over the many months until next summer’s crops come in. Late summer and early fall are consumed by freezing and canning vegetables, and Jeanette baked many, many pies this year, which she divided into portions and froze to provide desserts during the winter. 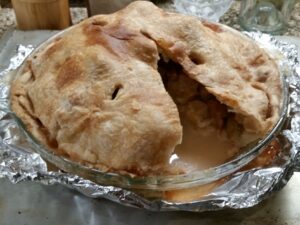 We had enough rain in late spring to allow our pastures to produce lush growth, giving us hope that they could provide our sheep plenty to feed on through the summer. 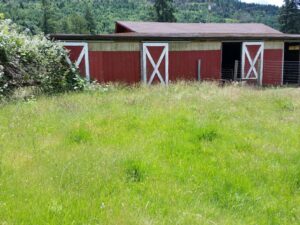 But western Oregon was gripped for most of 2021 by a severe drought, and in mid-June it was hit by a record-setting heat wave: the temperature hit 116 degrees Fahrenheit on our farm, and across Oregon over 100 people died from heat-related causes. By midsummer, our pastures had been burned dry and lifeless, and we were forced to buy hay and alfalfa to supplement what little the sheep were able to forage. 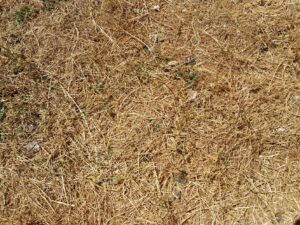 What grass was left by mid-July was so dry it crunched underfoot. 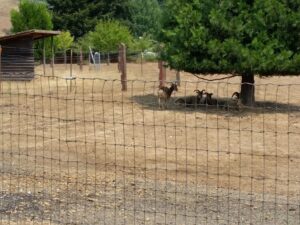 The effects of the heat and drought by midsummer.

For a second year in a row, thanks to the extreme drought and heat brought on from the effects of climate change, Oregon had a brutal wildfire season. At least, unlike last year, we were not directly threatened on our farm, but through most of August and much of September our farm was wreathed with smoke from large fires, the closest of which was burning only about six miles away. 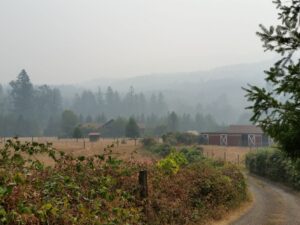 Smoke over the farm and mountain ridge behind during September.

But I have digressed. What you really want to know is what about book 5, yes? I made strong progress on it in late 2020 and the early months of this year. Although having time to write is never a realistic possibility during the busy months of summer, I very much hoped and intended to be able to complete writing book 5 in the fall, setting it up for publication in early 2022. Alas, I’m not going to meet that goal. In the early spring, rather unexpectedly, my German author-partner, Ruth Nestvold, who together with her editor husband, Chris, produces the German translations of the books in The Strongbow Saga, delivered the German translation of The Long Hunt. As those who have read it know, that was a very long book—over twice as long as any of the first three books–and it took a very long time to translate, far longer than Ruth had anticipated. Whenever I have had time to work on The Strongbow Saga since then, I have mostly been working on formatting the Kindle e-book edition of Die Lange Jagd—I contract out the formatting of the EPUB e-book version, which I received back only recently, and the print version, which I’m still waiting on. Because of its length, preparing the German edition of book 4 for publication has been a much longer than usual process. However, I owe it to my German partner to get the book published, and available for sale, as quickly as I can, so that has taken precedence over working on book 5.

I anticipate publishing book 4 in German within the next week or two, after which I will immediately resume writing book 5. However, at this point I cannot realistically hope to complete it before the end of this year. I promise to push hard, though, and get it to you as early as possible in 2022, before the rhythms of life on the farm can once more consume my time.

As Jeanette and I continue with the amazing journey our lives together have given us, we wish you all peace, happiness and safety for the holidays and the coming year. 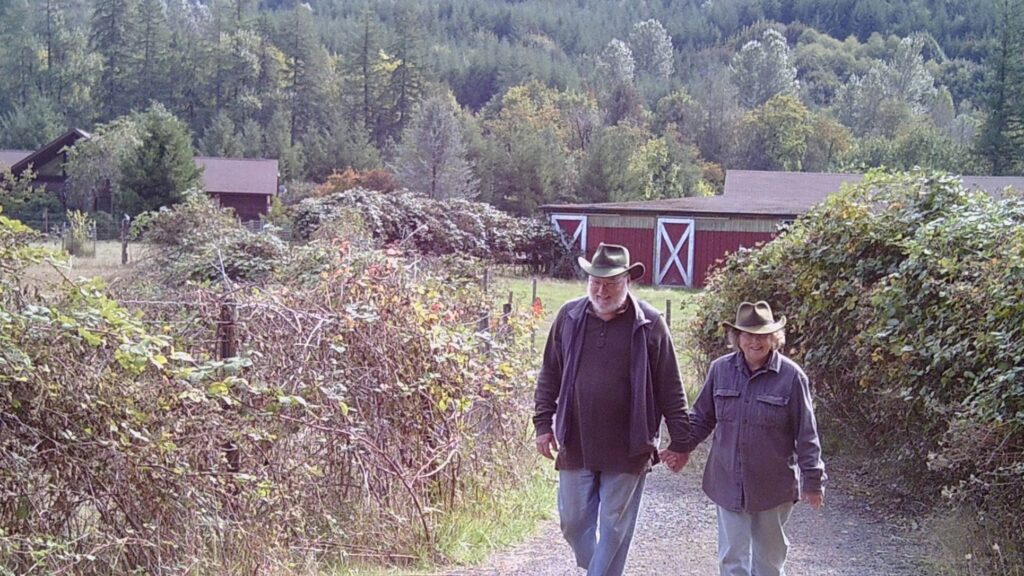