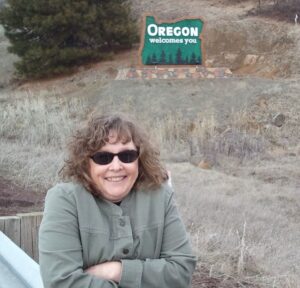 Ten years ago yesterday, Jeanette and I reached Oregon, after a several day road trip from our former home in Houston, Texas. Within a week after arriving, we had found the small farm where we now live and entered into a contract to purchase it.

Neither of us had ever lived on a farm before, or had any experience with farming or livestock, but we were ready to make a lifestyle change. It certainly has been that. It has been a fascinating, challenging, often fun and exciting, and at times exhausting and overwhelming experience. Every summer we plant and grow a large garden, and preserve, by freezing, canning, or fermentation, much of the many kinds of vegetables our garden produces, and which provides us with food throughout the year. Our first year on the farm we created, around a single, old apple tree growing on one edge of the property, an orchard which has flourished over time and now gives us a summer and fall bounty of peaches, pears, and several varieties of apples. We currently have a flock of twelve chickens plus one rooster that keeps us supplied with eggs, and a herd of heritage sheep that provides us with delicious, lean, healthy grass-fed meat. We have learned so much from living here, from all of the new skills, experiences, and challenges we’ve had to master. It has truly been a wonderful new life for us.

Jeanette has been the perfect partner to share this adventure with. She clearly was made for this kind of life. It has even brought out some previously unsuspected Oregon superpowers, including an amazingly acute power of observation that would make Sherlock Holmes proud. I still vividly remember one mid-summer morning in 2012, as we were walking from the house up to the barn, to let the chickens (a much smaller flock back then) out of their coop. She suddenly stopped and frowned, then pointed at some blackberry vines we were passing. “Look,” she said, “something has eaten some of the leaves on this plant.” She looked around some more, then pointed at a spot on the ground nearby. “And what is that strange looking poop?” I had been oblivious to what she had spotted. But that was how we first learned we had deer roaming the property—a discovery that months later, in October, led to our first meat harvest. 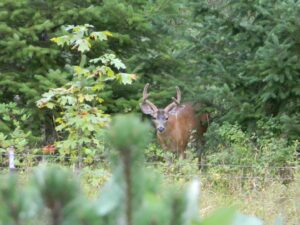 But nothing is ever all positive. Life doesn’t work that way. The amount of work this life on our farm demands of both of us is constantly, relentlessly high. And we’ve had some hard times here, as well as good, and some struggles. 2020 in particular was a tough year, with three serious health problems for me, one of which dragged on into 2021, plus a major wildfire that threatened to destroy our home, but thankfully got no closer than the top of the mountain ridge that overlooks our farm. Additionally, since at least 2019, and maybe earlier, every year has brought some significant unanticipated issues we’ve had to deal with, that have too often eaten away at the time I’d planned to use to complete writing book 5 of The Strongbow Saga. That has been the biggest downside of our life here, and a curse that seems to keep delaying Halfdan’s story.

In theory, the winter months here are our “down time,” to the extent that we have any, and are supposed to be when I have time to write. But from mid-November of 2021 through the end of the year, much of our time was consumed by visits from members of our family, plus a very old and dear friend whom I had not seen in over twenty years. Especially after almost two years of semi-isolation due to the pandemic, the visits were wonderful and joyous experiences, but no writing occurred during them.

My new goal became to finish book 5 and publish it by the end of April of this year. But that goal, too, has already fallen to the curse. We had a major snowstorm during the last week of December, which dumped about fourteen inches of snow on our farm. The weight of the snow crushed the blackberry vines that grow on the fence lines along our driveway (and which provide us with gallons of delicious, sweet berries each summer), and broke fence-posts along the fence in several places. It took Jeanette and me over two weeks, working off and on, to clear the dead and damaged vines off of the fence along one side, so that I could remove two broken fence posts and replace them, and so we could prune, train to the fence, and hopefully salvage what was left of the vines that used to produce the majority of, and without question, the best, of our annual blackberry crop. 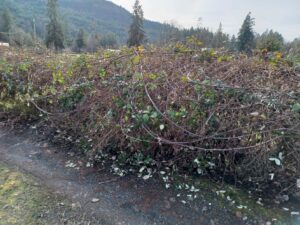 A heavy snow in late December crushed these blackberry vines and damaged the fence buried now beneath them. 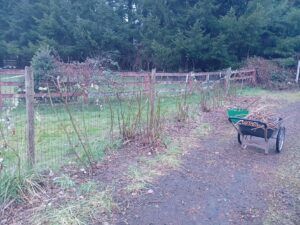 It took the better part of two weeks to cut out all of the dead and damaged vines, and repair the fence they had been growing on. 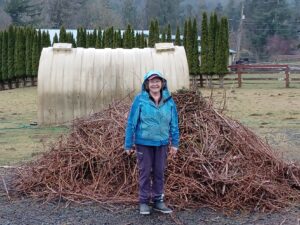 The burn pile of the dead and damaged vines we cut off of the fence.

Unfortunately, the fence we cleared and repaired was much less damaged than the fence on the opposite side of the driveway. It is still untouched, and the pasture behind it will be unusable until we can get it repaired. 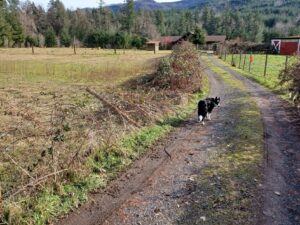 We’ve also had to devote time over recent months to reduce the size of our sheep herd. It had reached 26 sheep after the 2021 lambing season—a far cry from the two ewes and one ram which we began the herd with back in 2012. Western Oregon has, for several years now, been in the grip of a severe drought. A consequence of the drought is that our pastures do not grow the deep, lush grass that they used to each spring and summer in our early years here. Without that kind of pasture production, our farm cannot support a herd of 26 sheep, so we have been working, since the early fall of last year, to downsize the herd. For us, that means harvesting sheep: giving some to neighbors who know how to butcher their own meat, two to my son, when he visited in December, and butchering several for ourselves. For the first time since we began harvesting sheep, we have focused on females, instead of limiting the culling to males, in order to reduce the number of lambs that will be born in the spring. After I harvested a mature ewe a week ago, the herd is now down to 19 sheep. That is still too many, given the fact that the drought is continuing, and our pastures are already clearly not showing the rate of new growth that is needed. We will have to continue downsizing the herd over the rest of this year, but that, like everything else, takes time. Harvesting a sheep and butchering it takes me pretty much two full days of work. 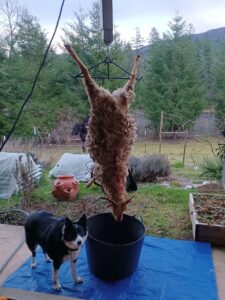 Year after year of drought, and its effect on our pastures, have forced us to aggressively harvest sheep this year to downsize the herd.

And just within the last few weeks, the curse struck again. When Jeanette and I went for our annual eye exams recently, I was informed by the doctor that the cataracts in my eyes—I’d known for some years they were slowly developing—had reached a point that he advised surgery to correct them. In case you are not familiar with what cataracts are, I’ll explain. Your eyes contain a lens which is what allows you to see by focusing the light entering the eyeball into an image on the retina, the “viewing screen” of nerve ends on the back side of the eyeball. Without a lens, your eye cannot focus. But in most people, as they reach an age, the lens becomes cloudy, causing a deterioration of the quality of vision that, if not corrected, can eventually cause blindness. Fortunately, cataracts can be very effectively treated by surgery: the doctor cuts open the eye, removes the cloudy lens, and puts an artificial, acrylic lens into the eye. In modern, well-equipped eye surgery centers the operation is done partly by computer-controlled lasers.

I had surgery on my left eye three days ago, and will have it on my right eye in two days’ time. It can take the eyes up to two weeks after the surgery for the vision to stabilize, so I’m not going to be functioning at full capacity for a while. For example, on the day of the surgery, for most of the day looking through my left eye was somewhat like looking through a piece of glass smeared with butter. Although the vision in that eye is still somewhat blurry, it is much clearer now, but I periodically have the disconcerting sensation that the ground, or surfaces in front of me, are sloping downward away from my left side, which causes me to feel a bit dizzy at times. And because I opted to have the lens implants with a focal setting for distance vision, after the surgery on my right eye, for some period of time I may be unable to read, until the eyes stabilize enough for reading glasses to provide the necessary close-in focus.

So, what’s the bottom line? I am clearly not going to finish writing book 5 by the end of April, much less get it published by then. My new goal is to get it out by late May or early June. And to help achieve that timeline, I have belatedly accepted the fact that I have not managed to successfully be both a writer and try to handle all of the work that this farm life requires, especially now that I am 70 years old, and do things a bit more slowly than I used to. Going forward, I have resolved to start hiring out some of the work that is needs to be done on the farm, including repairing the rest of the fence line that was broken in the December storm. I will get this book, and the next one, to you, I promise.