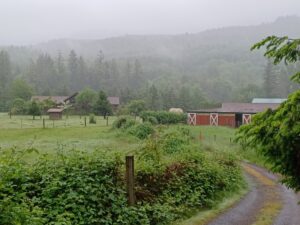 April and May of this year have been unusually cold and rainy, which has caused both downsides and upsides.

As I explained in my February 27th post, although Jeanette and I love our life on our small farm in Oregon, it is very challenging because there is always work to do. There is never any real “down time,” when we have nothing to do; there are, at best, periods of the year when we are—barring some unforeseen mishaps that must be dealt with—somewhat less busy. Those are the periods when I plan to fit my writing into our schedule, but after ten years of life here, I obviously still struggle to balance being an author and living on a farm.

Late winter through early spring in a “normal” year are one of the somewhat less busy periods. Our primary farm related tasks during those months, outside of the work of every day life, are starting the seedlings of the numerous different crops we will eventually plant in our garden, and, as they grow up-potting them to larger size pots. I had hoped, this year, during the time between seed starts and up-potting, to scramble and complete writing book 5 of The Strongbow Saga. But as I explained in my previous post, this, once again, was not a normal year. We lost a large block of time repairing a fence line that was damaged in a snowstorm, then I lost even more time when I learned I would have to have cataract surgery on both of my eyes. That pushed my hoped-for completion date of writing book 5 to, in a best case scenario, late May or early June.

That hasn’t happened. The eye surgeries did not go entirely smoothly. In theory, the surgery on each eye, which replaced my aging and cloudy natural lens with an acrylic implant, and which also was supposed to correct some distortion in my vision due to astigmatism, which is caused by irregularities in the shape of the cornea, or surface of the eye, would have left me with 20-20 distance vision, and I would have needed to wear glasses for reading and close work. In theory. As the surgeon said, when he first reviewed the status of my vision several weeks after both surgeries were done, “Sometimes we hit a home run, and sometimes the process takes several base hits.”

The surgeries improved, but did not fully remove the astigmatism in my eyes. To (hopefully) correct that, I will need a laser surgical procedure called Lasik. But that has not happened yet, because I’ve had to have two other procedures to correct other issues. It turned out that I had some debris from the removal of the old lens remaining in my right eye, clouding my vision slightly in that eye, which required a laser procedure to clean up the debris by vaporizing it. Then it turned out that the artificial lens that was implanted in my left eye had over-corrected and made my vision far-sighted in that eye, so last week I had a different (and quite uncomfortable) laser surgery procedure to reshape the surface of the left eye and hopefully correct the farsightedness. Assuming that was fully successful—and I will supposedly find out later this week—I will still need the Lasik surgical procedure for the astigmatism. Aging bodies suck!

All of this has required numerous trips into town, both for the procedures themselves and for various pre- and post-operative check-ups. From where our farm is located, it requires about an hour and a half round trip just for the driving time to town, on top of whatever time the actual business in town requires. We love living out in the country, but it is not always convenient. Needless to say, because of the further loss of potential writing time, I have once again  failed to meet my hoped-for completion date of book 5.

So, what is the new plan, and current projection for book 5? My new goal is to finish writing book 5 and publish it by the end of this year. I’m going to have to try to find bits and pieces of time where I can, and summer is the busiest time of the year. In so many ways, though, this is already not a “normal” year.

In a “normal” year, by the end of May we would have already planted in the garden most of those plants we began as seed starts weeks or months ago. But April and May have been unusually cold and rainy. We even had a light snow just a little over a week ago. Many days, even when it has not been actively raining, the ground has been too wet to work. The downside of all of that is that we still have much work to do to get our garden in—most of our numerous plant starts are as yet still unplanted—and because of the late start, our garden will for the most part be much later than usual producing the various vegetables and fruits which we both enjoy fresh and preserve by freezing and canning, to feed us throughout the rest of the year.

But there are also upsides. One is that after we do get the garden planted, there is going to be somewhat of a lull, while the plants grow larger, before they begin producing harvest-able crops. That does not happen in a ”normal” summer, and I plan to use that time to write.

Additionally, we were very concerned, because we have been in drought conditions here in western Oregon for several years, about the poor condition of our pastures, and their resultant inability to provide sufficient food for our herd of heritage sheep. In anticipation of that, we had reduced the size of the herd by aggressively harvesting from it. But after weeks and weeks of rain, our pastures currently look the best they have in years, so that crisis may have been averted, for this year, at least.

So, to summarize, although book 5 is once again behind schedule, I am still working on it, and still plan/hope to publish it this year, though now that will not happen until closer to year’s end. And in separate Strongbow Saga news, which I failed to mention back when it happened, I did publish the German language edition of Book 4 back in January of this year. The series is still progressing, just not as smoothly or timely as we all wish that it would. 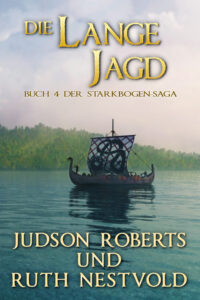 The German language edition of book 4 was published in January of this year.

6 thoughts on “It’s a Matter of Time”